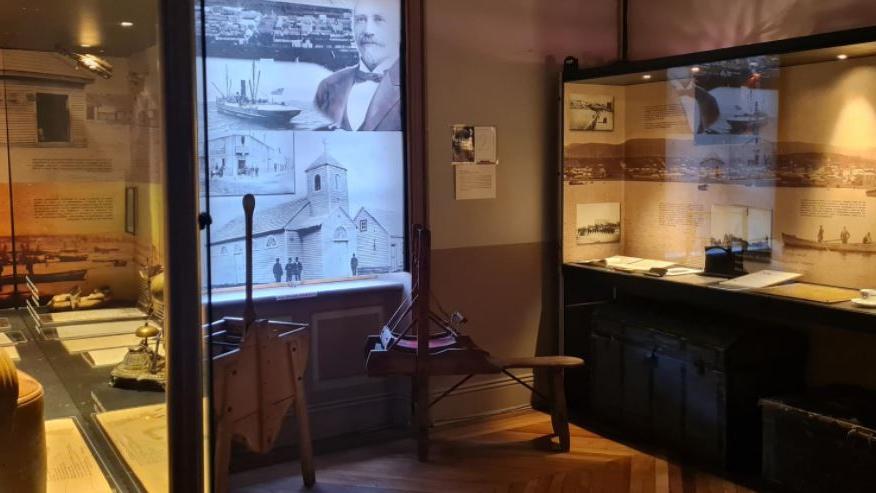 This room displays the full development of the Colony in 1900, which was already fully established, due to shipping, so you had department stores, suppliers of shipping materials, livestock, refrigerators, among others.

This boom had a new impetus with the discovery of gold. Were also established at that time and a formal public school, hospital, post office and began to planned urban management.

Worth to state that during the year 1874 came to Punta Arenas two men whose fates and their families would have to partner closely with the progress Patagonia: Spanish and Russian José Elías Menéndez Braun, accompanied by his sons, one of Mauritius, who become one of the giants of regional growth along the Portuguese José Nogueira, who up to Punta Arenas in 1866. Nogueira, was a peasant who made his fortune in marine hunting thin-skinned marine animals, and who married the sister of Maurice, Sara Braun Hamburger.

The Braun based their corporate power in the administration of an inheritance left by Jose Nogueira trade in the hands of his widow, Sara Braun. She went to the livestock category and his brother Mauricio administered primarily the shipping and trade.

Much of the commercial activities were channeled through the Braun & Blanchard Company and later in the Operating Society of Tierra del Fuego.

Jose Menendez had built his financial empire, both with San Gregorio ranch and his home business, could conceive of important and successful business ventures, industrial and marine. With their children formed the Cattle and Commercial Behety Menéndez Company.

Mauricio Braun activities and José Menéndez transcended all of Patagonia, and this led them to meet their interests by creating the Import and Export Corporation of Patagonia. At the time spent to handle almost all of the cattle wealth in southern Chile and Argentina.

We can see in the c ases a map of the city in 1851, José Nogueira’s hipping documents, a top hat of José Menéndez, liquors from the Mauricio Braun’s cava, porcelain from the Menéndez-
Behety and Blanchard Society, travel trunks, an inkwell belonging to the Governor of Magallanes, Manuel Señoret, a portable weight for gold, sandals from the Dalmatian/English settler Michael Popovic, bronze plaques from the Cosmos Hotel and a telephone, which is very appealing since the late nineteenth and had joined the services of telegraph, telephone and electricity to our city, very early considering the context of Patagonia at the time.