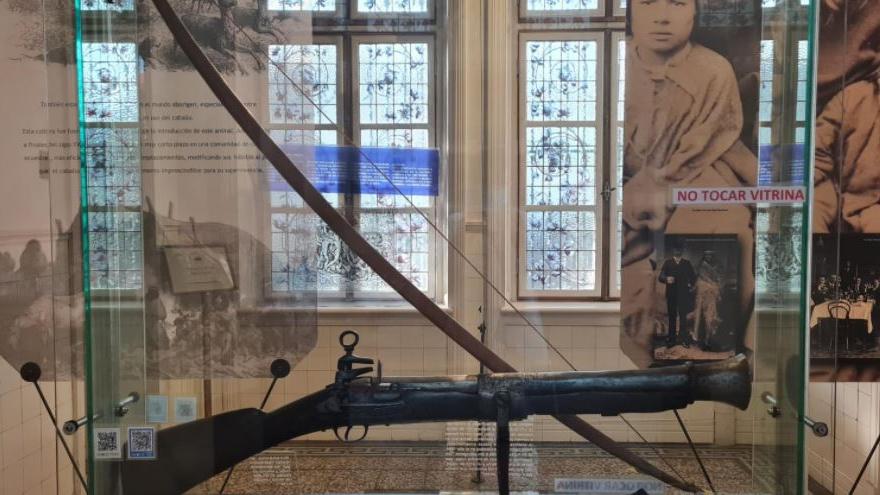 This room originally belonged to the boys bathroom. It has large windows with pictures of flowers painted by hand under a technique known as stained glass.
We will look very general, in this room, to see how was the of cultural contact process between the "white man" and
southern ethnic groups, ie, its characteristics and impact on the livelihood of indigenous peoples, as we called the meeting of two cultures.The territory south of Chile has different landscape scenarios: the extensive grasslands and wet world of islands and channels.

That world, of singular beauty and essentially water, was inhabited by small bands of hunter- gatherers who roamed the land in search of their livelihood. With an extremely simple social organization, survived for hundreds, perhaps thousands of years in an environment of extreme rudeness. However, contact with the Western world radically altered his lifestyle. Survived until the early nineteenth century, establishing sporadic contacts with Salesian missionaries and European explorers, but the establishment of regular routes between Punta Arenas and central Chile and the arrival of chilotes’ sealers to the area, and the various gold and whales’ exploitation tasks, plus the momentum in the last quarter of the nineteenth century the development of sheep farming, were destructuring to their way of life, accelerating the process of acculturation.

This situation is reflected in the plains of Tierra del Fuego, inhabited by Selk'nam, pedestrians hunter-gatherer people who had a tragic end being exterminated by settlers who settled the island in late nineteenth century, a booming period of large sheep ranches. Occurred the meeting between cultures, the white man introduced animals from Europe, but also brought with them new customs and habits, and clear conditions: alcohol, snuff, plagues of smallpox, measles, tuberculosis, among other evils, they started to leave a deep footprint. Adding to this, the evangelistic zeal, which had the epicenter of Salesian activity in Dawson’s Island, off the coast of Punta Arenas. They build a place to teach them how to be dressed (was shameless nudity), to behave like civilized beings, and to work in domestic service for women and men in the fields.

In one of the films, it describes the story of the arrival of 4 boats to the Anglican Mission in Ushuaia, in order to establish the presence of Argentina in the place. In a further one we can appreciate a white man dressed as Aonikenk, with their children. The settlers who began arriving in this land, were mostly of European origin, and sought Aonikenk relate to because they were more similar to their own_appearance.
Finally, next film, we see a settler, with the Cacique Mulato (leader among Aonikenk), which was frequently invited to social gatherings to make territorial agreements.